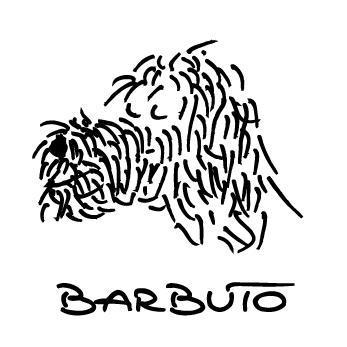 Being that my last dinner with my dad and sister was such a success, they were ready for their next round, so I made a reservation at Barbuto in the West Village. After watching Top Chef Masters a few seasons back I was all up in Jonathan Waxman’s business and was intent upon eating there a while back, so this was my second trip, and I was thrilled about it.

I knew the food would be good, and I like the “neighborhood” vibe.

My sister texted me that she was in crazy traffic, but as it turns out so was I, so they beat me to the restaurant.

I ended up hopping out of the cab and walking 4 blocks, because we sat through two red lights, and my patience was running thin, two blocks away my sister texts me, “where are you?”

I arrive and see olives have already been placed at the table. Score!

I sit across from my sister and dive into the olives as we wait for my dad (he was parking the car).

We’re all obviously starving, and the dinner reservation is for 7:15, so imagine if I had made it for 8pm.

“Where’s the waiter?” My dad exclaims. He asks two different busboys to summon our waiter (we had already finished the olives).

I have such a strange love for this place, and kept mentioning weird facts about it, as we strummed our fingers waiting to eat.

“Isn’t the garage style windows so cute?…Don’t you love how casual it is?…I like the area.” (uch put a cork on it).

“The apartments around here are pretty nice. Would you live here?” my dad asks.

“Maybe.” Are you paying my rent for this? Yeah I didn’t think so. I’ll just have to go here for dinner instead.

Finally the waiter arrives, and we order wine and food.

My sister and my dad got white, and I got red (because I can’t have white, stupid allergy!).

I ordered the green salad and scallops (knowing full well I could just have bites of the fattier options off of the other table members).

My sister gets Burrata cheese (like anything else on the menu stood a chance), and pork ribs with peaches.

My dad orders the chicken, because it’s their specialty, but can’t decide on an app.

The waiter recommends a half order of the gnocchi, and it was like…the most ground breaking moment of the whole dinner.

I pick the sautéed greens figuring we’re bound to eat some of it.

“Do they not give you bread here?”

We asked for it.

Our appetizers arrive, and my dad and sister look like they’re ready for battle.

They look wounded, and I try to snap the photos as fast as I can, and then they go in for the kill.

No one wants one bite of my lettuce, while my sister and I nearly stab my dad’s thumb aiming our forks at his pasta.

As we shovel it in, I go into my past weekend in Fire Island.

I did! What can I tell you I did! It happens! I usually reject rocket fuels, but I had made an executive decision that it was go hard or go home, and I guess I went hard, and then I went home and threw up.

“Did you make it to the bathroom?” my dad asks.

“Yes of course I did!” I mean give me some credit.

The throw up was just a lead into another story anyway, and yes I tell my dad this stuff.

“So as I was stuck on the couch dying I was with all the guys because the girls left to get food, and watching guys bro out is just weird.”

I went on to explain that I watched my guy friends play beer pong at noon on a Saturday morning, and when I finally got my act together and the girls left for the beach, we could hear the guys rocking out to Katy Perry as we left…

Mains arrive. The plates are not the prettiest, but that’s why I sort of love it. It reminds me of eating at home, where presentation is secondary to taste.

I dig into my scallops with corn and scallions, and the corn was so sweet! I don’t think my dad was originally so into the chicken, but he grew to love it, and needed like 3 extra napkins. Dad, stop.

My sister proclaimed that her dish is the best, and I don’t know maybe it is, because after I finished my scallops I pulled her plate closer to me and screamed, “give me some of it!”

We soon realize we never got our side of veggies, because we clearly needed more. The waiter was super great, and didn’t even charge us for it. They were good, but probably would have been better had we eaten it with the rest of our meal. I thought they were sort of lemony.

As the dessert menus are handed out. My dad stares at the menu, looks at my sister, and is like “well we all know who wants the cheesecake.”

“Actually the cheesecake DOES look pretty good,” my dad says.

So we got it. Again, it looked like a bunch of mush when it came over with the sauce on top.

“Too much raspberry sauce,”my dad and sister agree. Of course we don’t like the fruit portion.

But boy was it good…

As we’re getting ready to leave, I mention another restaurant I’m considering  for our next dinner.

“Yeah I went with my friend and his boyfriend” (yes he’s gay).

“Of course it is…” Watch it Dad, because that might be our next stop. 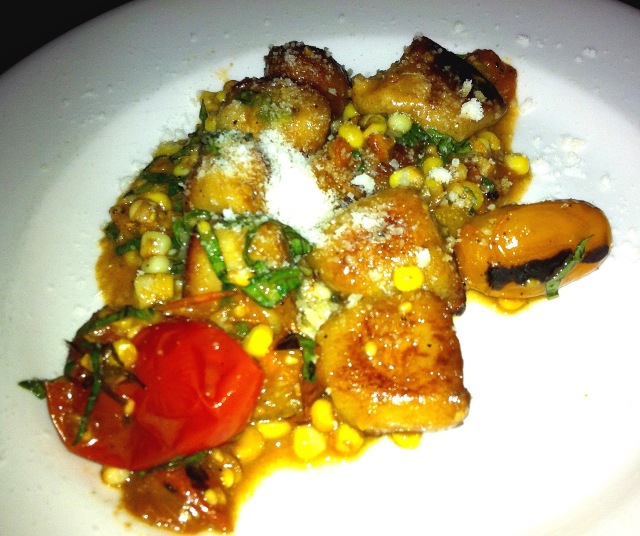 I can’t put into words how great this was. I also hate that guys can order pasta as an appetizer while I chomped on lettuce. It’s so unfair. 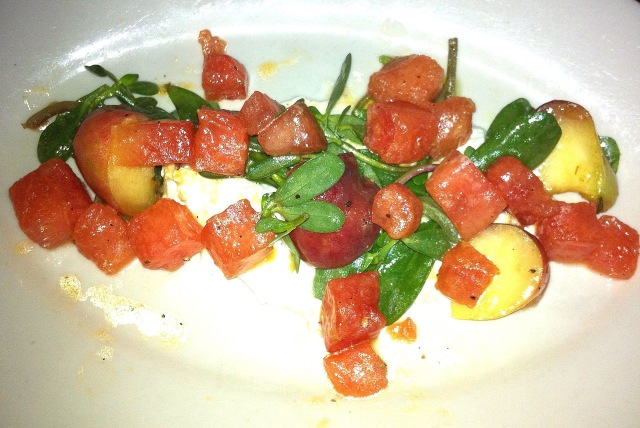 Summer is the time for fruit, and cheese is…for every season. Refreshing salad. I didn’t love the cheese, because I expected it to be creamier, but still very good! 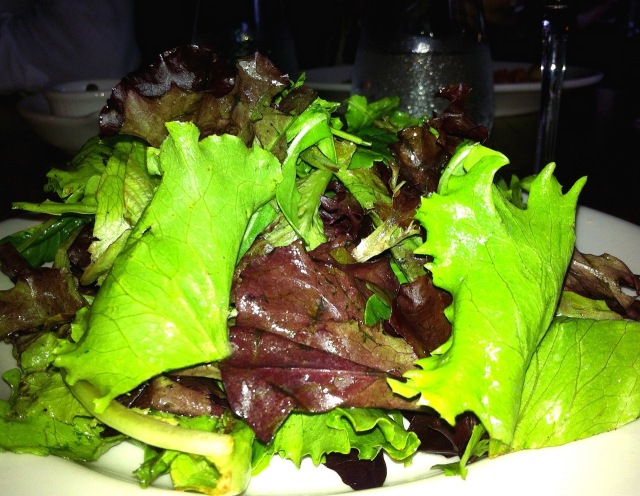 It’s just lettuce, and it was a little salty, but I wasn’t expecting the world when I ordered this. 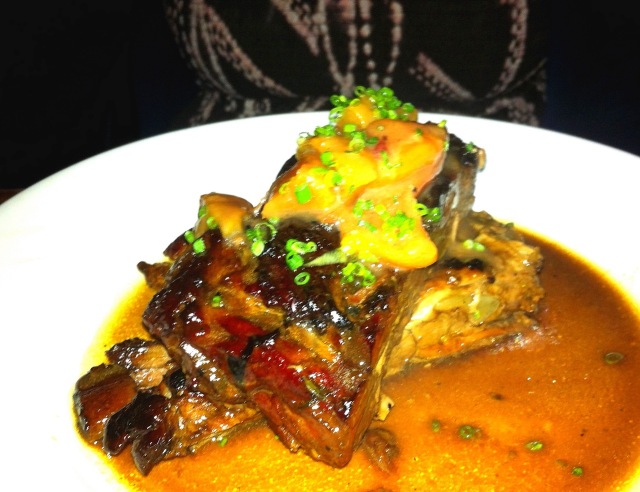 I rarely dip into the red meat pool these days, and this is so totally worth it. Pork and peaches are a fab combo, and the portion is piled high. My sister almost didn’t finish it…don’t worry she did. 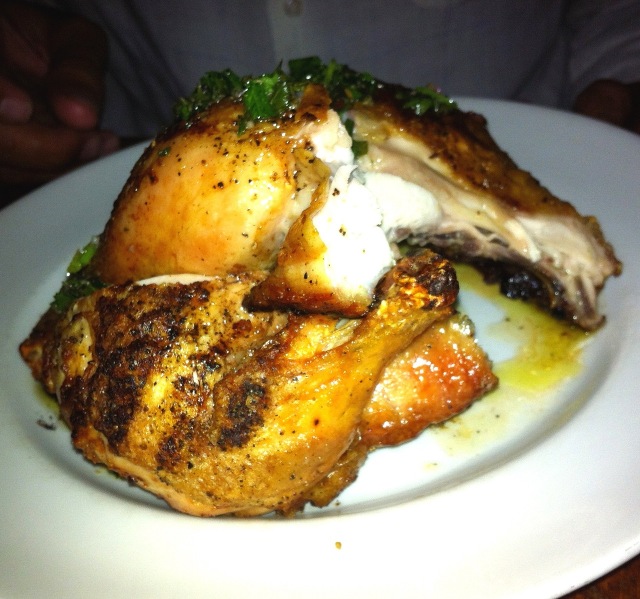 The Barbuto specialty! Chicken can sometimes be boring, but this has crispy skin, and is super juicy, and could feed a whole family…or just my dad. 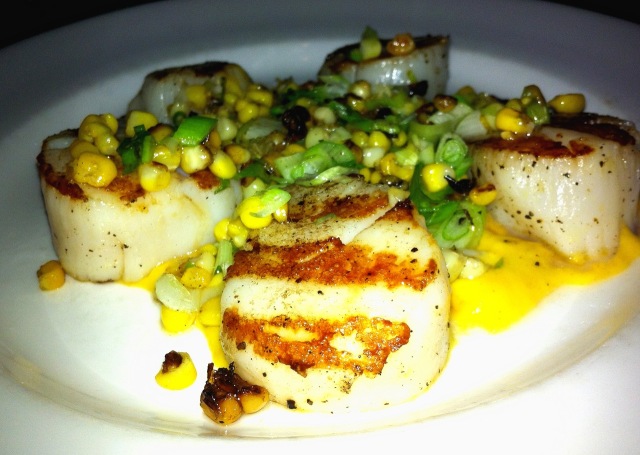 Most places give you like 3 scallops, and they give you 5, so yay to that! I loved the corn and scallions, and the scallops were delic! It’s a great summer option. 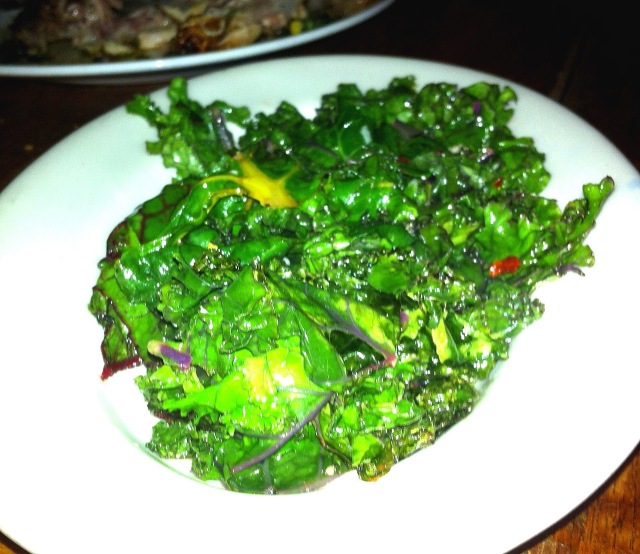 It was a bit lemony. I don’t think you absolutely need to order it, but it’s still a good veggie option. 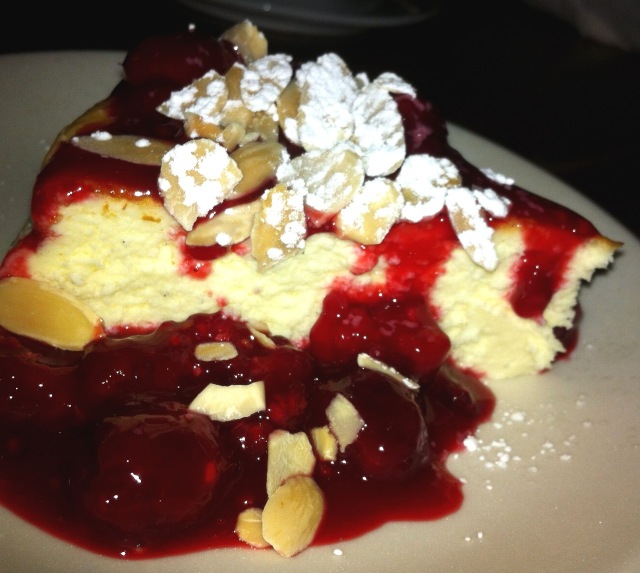 So so so so yummy! I missed the last bite, because a raspberry was obstructing my view!