After a few years of wanting the full experience at the San Gennaro Festival it finally happened. Somehow 8 girls found a night that worked for everyone on a Thursday night, and made reservations at a restaurant without any fuss at Angelo’s. So far so good right?

“How are you getting to dinner?”

“I have no idea,” I replied on gchat to my friend. Me, get anywhere downtown without a cab, and through public transportation instead? I think not.

“Want to meet at the subway so we can go together?” (Yes, I have no idea where I’m going, and I could definitely use a budget friendly ride)

As I’m running to get ready (is it cold out? Do I need a jacket or maybe just a scarf? Am I going out after this? Should I put on liquid liner?) I get a text from my friend saying she’s getting her nails done two blocks away from me, and she’s taking the subway with my other friend and me.

I get to the subway, and she tells me she couldn’t find my building (she was on my block…she probably just had to look up).  Now I’m starting to sweat as we wait for the 6 to arrive, and I realize why I hate the subway. I pull one arm out of my sweater so it’s half on/half off.

“I’ll fix it once we’re on the train”

We get off the subway, and wait for our other friends who took the subway, and as they arrive, something gets into my eye, so I am now walking through Chinatown (is it Chinatown?) trying to get an unidentified object out of my eye without smudging my liquid liner (yeah, I decided to wear it).

We walk through the hustle and bustle that is San Gennero (Honey eat here! Want to be a winner? Look at this menu!), and just as I see the word “Angelo” in view, my two friends get distracted by a hustler offering them a “free game” outside the restaurant (you know where you have to throw ball in a container, and it looks so easy, but it never works, and you spent $45 trying to win a gigantic banana stuffed animal).

“Guys! The restaurant is right here!”

As I’m standing outside the restaurant waiting to be seated, I see a possibly drunk platinum blonde looking right at me in the restaurant, OMG IT’S KIM D FROM REAL HOUSEWIVES OF NEW JERSEY.

“Is that Teresa next to her?” I see a bundle of black coifed hair.

We are escorted to our table, and all 8 of us awkwardly try to turn our heads to see if it’s her as we walk past their table to ours.

I HAVEN’T EVEN BEGUN…

Two of my friends run off to talk to Kim D and Teresa as the rest of us settle in.

Our friends return, “We got a picture! We got a picture!” My friend shows us a picture of the two of them, Kim and Teresa, as my friend explains she didn’t know where to put her hand so she put it on Teresa’s chair.

“We told Kim about your scarves go talk to her!” They say to my friend who sells scarves (that makes sense).

My friend runs off, her shawl flowing behind her, as she heads directly for Kim. She comes back victorious, “I’ll be making a trip to New Jersey this weekend…”

“I think we should get a few appetizers to start, and we can each get our own mains.”

“I just want a salad,” says my friend.

“How about baked clams?”

Pasta, pasta, pasta, “I think I want seafood,” says my friend. Idiot… (ordered: orecchiette with sausage, rigatoni a la vodka, cappellini in a spicy tomato sauce, gnocchi in a tomato sauce, and gnocchi with pesto…and octopus)

We finally put in all of our orders with the waiter.

“He called me Bella too…”

Is this happening?? At least the man knows what he’s doing.

Every time the waiter puts something on the table I have my camera out before he even puts it on the table. These girls aren’t going to wait for me to take a picture before they dive in.

When the pastas arrive, I pick my fork up like it’s a magical wand, and start going from dish to dish scooping up noodles so I can “appropriately blog” (I haven’t described a dish yet).

So want to hear about the dishes? I do too.

Salad: why’d we even order this?

Bread: I meannnn who doesn’t dip their bread in the baked clams sauce? A moron, that’s who.

Mains…look at the descriptions under the pictures for that. This story is long enough as it is.

My friend next to me got the gnocchi in a pesto sauce with melted mozzarella on top (I know!). We should have switched plates because I was essentially sitting on her lap eating the dish. At least they’re large portions.

“Let’s get dessert outside.”

“No, that isn’t right either.” (this all happened)

“That’s definitely going in the blog” (WHY WOULDN’T IT GO IN THE BLOG!)

We should definitely get dessert…dessert seems smart. What seems smarter than dessert, fried oreos as dessert.

“I’m definitely taking a cab back.”

As we’re sitting at a red light, my friend screams, “That’s Lorelai!” (from Gilmore Girls)

“Lorelai!” We scream outside the cab window (that’s not her name).

I don’t normally do this, but I can’t help it…IT’S TERESA! 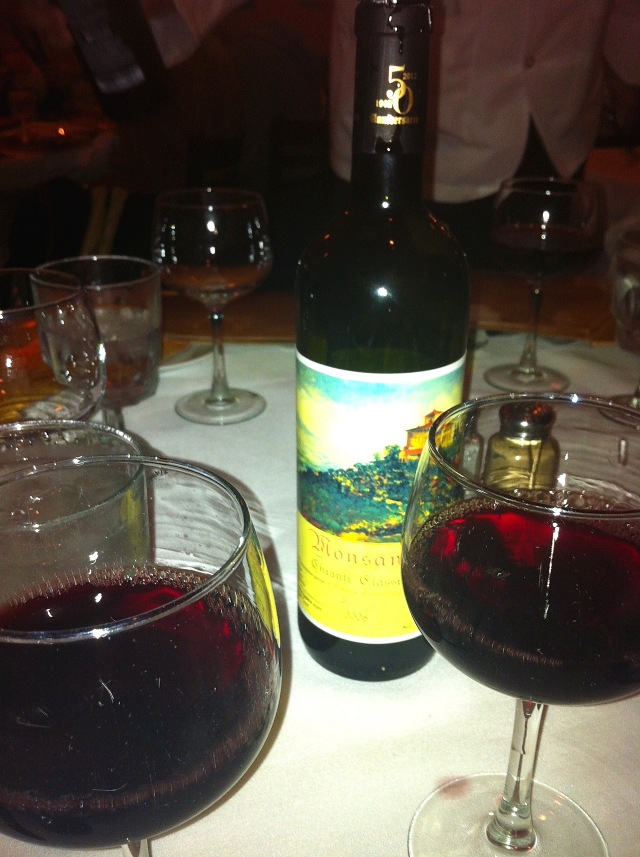 Great way to start the meal! It also wasn’t too salty, which was nice, so it didn’t overwhelm you before the meal started. 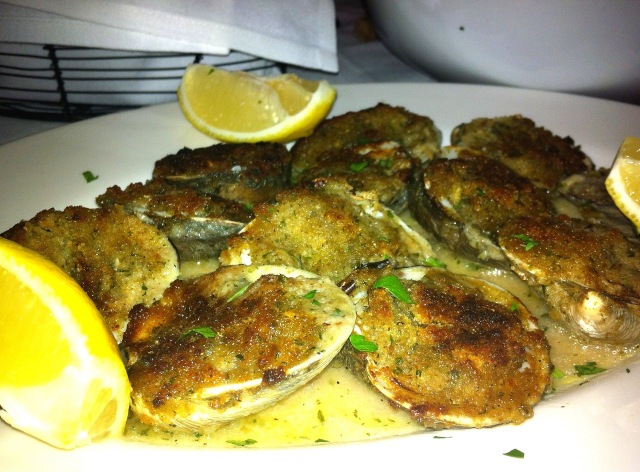 This is a double order. It was delicious! It had a good ratio of breading to clam, and there was of course extra sauce to dip your bread in. 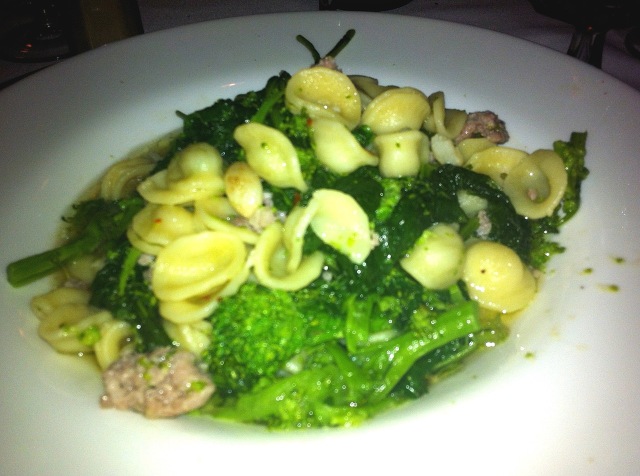 This is my dish. I thought it was simple with minimal sausage, but I ate my friend’s pasta next to me with plenty left on my plate, so maybe it’s not the number one thing to order, but it’s definitely simple and a change of pace if you don’t want something too saucy.

This was not that spicy and a teensy bit saucy, but overall a good dish. Not my favorite on the table.

It was a really nice bite. My friend said it looked like ketchup, which it sort of did.

Angelo’s (Gnocchi in a pesto sauce)

Hands down the best dish at the table. It’s super rich, and you don’t NEED to finish it, but I think everyone deserves a bite of this. 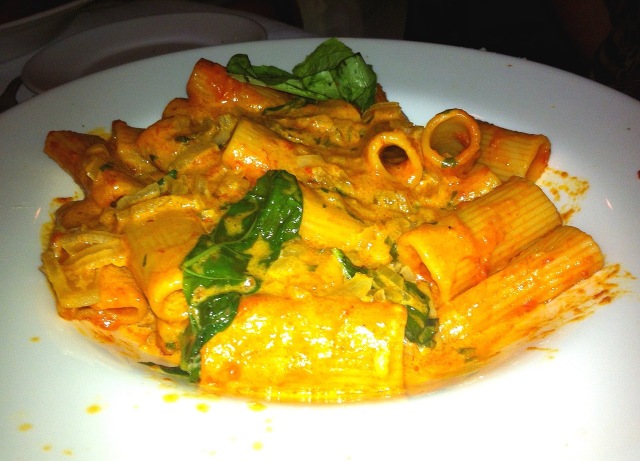 The noodles were cooked perfectly, and the sauce was delicious. This dish was completely clean by the end of the meal, and was finished first.

It’s “healthy” I guess, but it is still dipped in oil, and not nearly as good as a bowl of pasta. If you’re in Little Italy, just go for it. 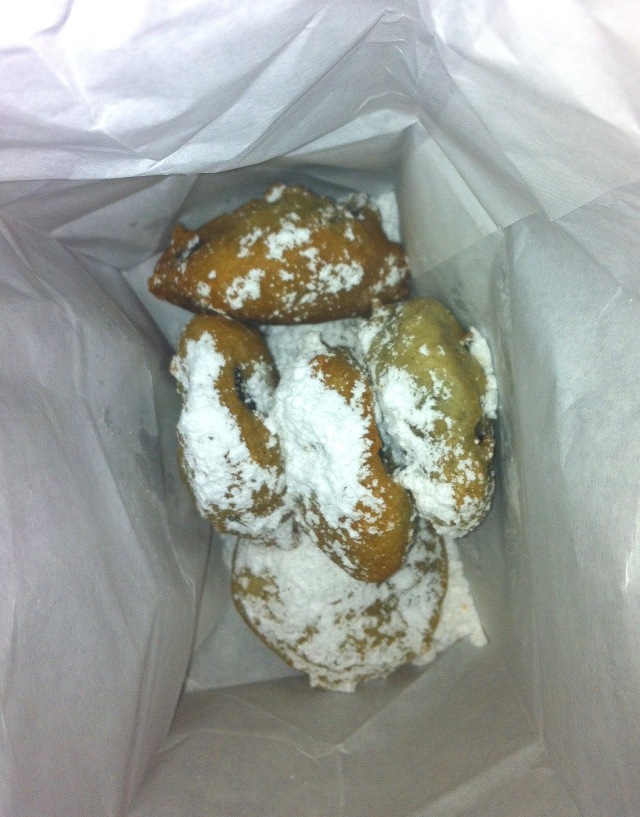 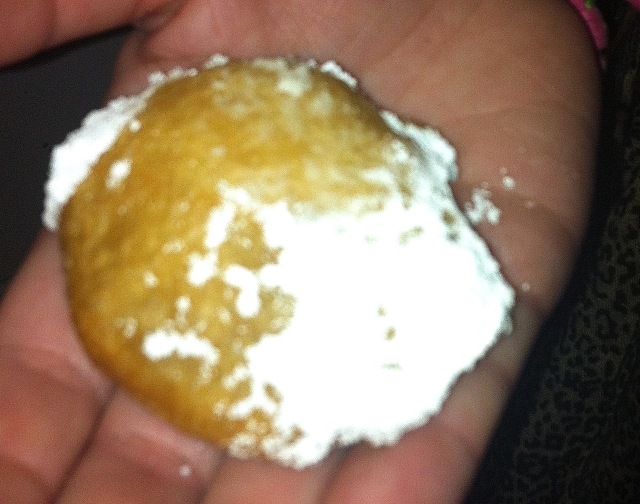 I have never had a fried oreo before, and it is just so much better than you would think it is. It is a ball of fried dough with powdered sugar, and inside is a chewy gooey oreo! It doesn’t scream class, but whatever.