After hearing about the wonderful concept of New York culinary salon, City Grit, I decided I just HAD to try this out!! I don’t want to butcher the explanation of what City Grit is so I would just click on the link if I were you, but I will try anyway. Pretty much, this little lady named Sarah Simmons hosts different food events in a space in Soho. They host about 15 events per month, and each one is a multi-course meal with a theme. Each dinner is completely different from the one before. Sometimes they have guest chefs, but mostly Sarah runs the show.

Anywho, back to me! After e-mailing my fake boyfriend aka gay best friend about this, he wrote me an e-mail saying he wanted to go to an event called “Best of the Best” for a mutual friend’s birthday, and asked if I wanted to go (it was my idea, don’t even think about claiming it). I bought my ticket (it was $60 for a 5 course meal, alcohol not included), and decided to be shmoozy and e-mail the host, Sarah Simmons, for a sneak peak of the menu. She obliged, and swore me to secrecy. I was thrilled to know more than my friends so I didn’t tell them anything.

As the day approached, I wanted a plan for the night. Did I need to print a ticket out for this? (You don’t.) Where was I meeting them? (It was my gay bff, the birthday girl and her boyfriend.)  My best friend may be gay, but he’s a dude, which means his planning skills are minimal at best (he didn’t make reservations for his boyfriend’s birthday until the day of his birthday… SUCH A BOY).

I gchat the birthday girl asking what the deal is (she usually knows what’s up, and I felt like I could trust her game plan). Turns out, it was a surprise…woops. You would THINK that my friend would include that in the e-mail, but no, he did not. Like I said HORRIBLE PLANNER.

The birthday girl and I conspired to not tell him the surprise was ruined (so if you are reading this, you already know, the house has been boarded up and we are staying at the Holiday Inn). P.S. it’s your own fault.

I meet them outside their apt (they all live together. Three’s Company, hit it!), and as soon as I arrive I announce, “Let’s go I’m starving!”

Mr. Horrible Planner gives me a crazy look and goes, “It’s a surprise!”

So, we arrive, and if the birthday girl really didn’t know where we were going, she actually WOULD be surprised, because the outside of the building says, “Furniture Shop.” They are so tricky (think speakeasy sorta), and a sign was written on the door that said, “we will be right back.” Ok….

“Are you going to tell her yet?”

“Badaya.” (that is a made up word that he kept saying over and over again on the way to dinner)

We only waited a few minutes until they opened the doors for us. You walk in, give your name, and then they seat you in assigned seating, (it’s assigned by group, so my friend called ahead of time to say that I was with them, because we didn’t sign up together so keep that in mind if you go!).

The space is kitschy. It is an old Catholic School turned into I guess a culinary salon, so do what you want with that knowledge, but the bathrooms are far away with low toilets (it was an elementary school). Also, they made it unisex. It wasn’t so bad, but it wasn’t the highlight of the event. I digress…Guests sit in two rooms with long tables scattered throughout, dim lighting, dark wood, and “Western” accents. It’s definitely not a sexy vibe, but it’s fun!!

“Are all events held in this space?”

“No, they change it,” responds Mr. Horrible Planner.

Disagreement. I looked up other events, and I know they are all held on Prince Street.

“I think they change it.”

The menu is posted on a blackboard, but I had it in my hands on my IPhone (I win).

“Does anyone want to read the menu?” I point to my phone.

“I’ll take a look at it,” says birthday girl.

“It’s on the blackboard,” responds Mr. Horrible Planner. (Ok, squint at the blackboard butthead…someone doesn’t want to give me any credit)

I glare at my best friend turned arched nemesis and am about to make a scene at our table, when our waiter comes over to save the day. He introduces himself as Dan Brown (he did not write the DaVinci Code, and it took a lot for me to NOT make that horrible joke at the table), and lets us know our wine options. I am allergic to white wine (if I’m ok with this you can be too) so we decid to share a bottle of red between the four of us, it eventually turned into 3 bottles…woopsies!

First, we are served with an amuse bouche of a fried oyster wonton with spicy mayo (are you salivating?). I know an amuse is just supposed to be one bite, but I was starving! KEEP IT COMING!!

I was really feeling the wine by the first course (shocker), which was a seared scallop, another baby plate. I get it. I get it. It’s a progression, but my stomach really didn’t give a flying…

As the first course was being distributed to the last few people, Sarah and her business partner spoke, giving some background on City Grit (p.s. her partner said all events are held in the same space, booyah!), and then a description of our meal. Sarah said the meal were the top dishes of their past events, so rock on! She was just so cute. She’s from the south, and while I usually despise anyone using the word ya’ll she made it sound so endearing! Let’s be friends Sarah!

However, that doesn’t mean I withheld all judgment (puh-lease)! When describing the third course, a fried chicken biscuit with deviled egg, she said…

Couldn’t agree with him more Sarah. You forgot the word more. You just changed the meaning of that sentence.

I hope the people next to us were not listening to our conversation.

The 2nd course was gumbo, a bigger portion score! Then came the chicken course, which tasted just like a gourmet McDonalds chicken filet, but with a twist. I tried to eat it slowly, because I wanted my last bite to include the biscuit, but it was just so hard!

Since the space is two rooms it takes some time for the servers to distribute all the plates to each table, so there is quite a bit of time between each course. We were over two hours in with two more courses to go!

“You had a weird friend at your birthday party.”

“Nope, they were all different colors! And when we pointed it out he said, “That’s such a Samantha thing to say.”

“I think he was in a weird mood that night…”

Fourth course! Boneless short ribs with paramesan cream grits and braised collareds. It was our biggest portion yet. Suddenly I was full, and I couldn’t finish the plate. I became a new woman.

“I get the progression now. Makes total sense.”

My friend was scraping the parmesan up with his utensils, and I started to gag watching him use his fork and knife so intently just for a tiny puddle of cheese. I was definitely satiated.

I tried to not look at him, “I got a gel manicure for the holidays!” as I wiggle my fingers jazz hands style.

“Do I look like Barbie?” My nails are currently bright pink. The lady applying my gels asked if I was going away, they are just THAT tropical looking…

Dessert!! Banana pudding with salted Caramel. I am not the biggest of banana cream pie, and that’s pretty much what it was, but in a jar. However our awesome waiter, Dan Brown, brought out one with a candle.

Happy birthday to you.

Happy birthday to you.

Hap-py birth-day dear ___ (silence in the Catholic schoolhouse as the patrons wait to hear her name, and then when we say it, everyone laughs like they knew the whole time)

Happy birthday to you!

As we were leaving…

“Hey what was that word I kept saying on the way here?” 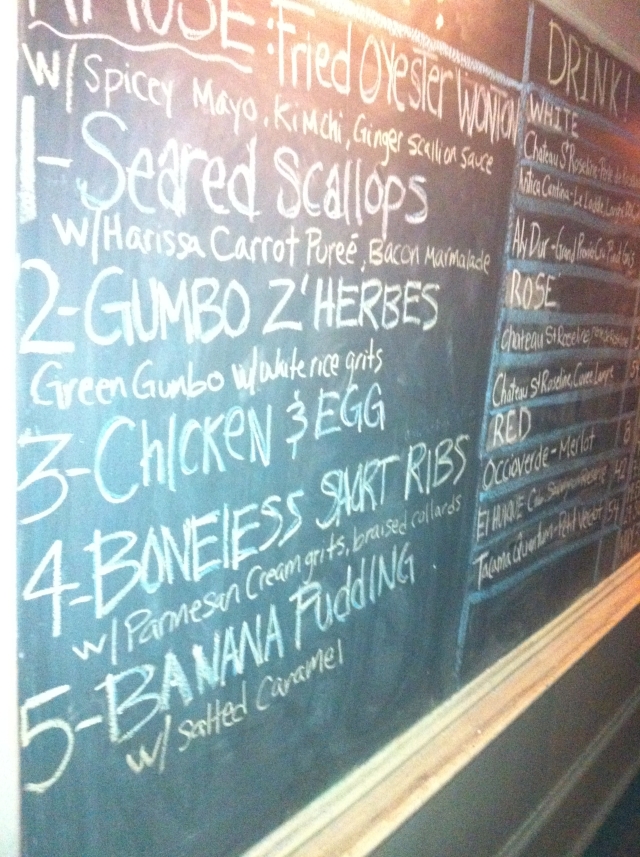 Here is the menu of the 5 course delight!

This was described as Asian food with southern ingredients. I would have eaten 10 more fried oysters. Great way to start off the meal!

Smiley Face!! Bacon marmalade, need I say more?? This was my probably my favorite, and it was just so teeny tiny. I wanted more!

I know this looks gross, but it was not! It was very hearty!

Sarah also told a great story about how this specific gumbo recipe is one of the oldest gumbo recipes and was almost extinct, but was revived after Hurricane Katrina, when people would make large pots of this dish to survivors of Katrina’s aftermath)

I loved this! Classy fried food is where it is at.

This was definitely the biggest portion we received all night. It was a little chewy at first, but once you dug into the middle it melted in your mouth!

Not my favorite part of the meal, but if you like banana flavored dessert then you’re in the clear! Please not the Christmas themed birthday candle!